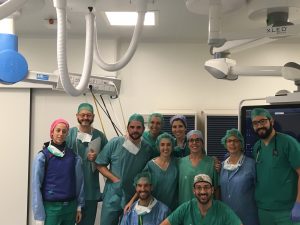 On 24 and 25 October, as in all the previous editions, Cardiva participated in the 6th workshop on "Advanced endovascular management of lower extremity peripheral arterial disease”, run by Dr Claudia Riera Hernández and Dr Marc Sirvent González, and organised by Dr Secundino Llagostera, Head of Vascular Surgery, at the Germans Trias i Pujol University Hospital.

The workshop was attended by vascular surgeons from different Spanish hospitals: The Canary Islands, Madrid, Basque Country, and Andalusia. The workshop attendees focused on different cases and put into practice new approaches in the advanced endovascular treatment of lower extremity peripheral arterial disease. 5 cases were studied in the course: the first case involved a femoral-popliteal intrastent restenosis in a patient who had previously undergone transfemoral thrombectomy and stenting. The second case consisted of diffuse intrastent restenosis of the distal trunks where the patient had previously undergone a bypass and stenting. The third case was diffuse disease of the superficial femoral artery, which had previously been treated by mechanical thrombectomy, stenting and angioplasty. Finally, there were two cases of left superficial femoral artery stent occlusion. In one of the cases, the patient had been previously treated with recanalisation and stenting. In the other case, the patient had undergone angioplasty for blue finger syndrome and stenting.

The treatment of the patients included equipment distributed by Cardiva, such as Angiosculpt XL (Spectranetics), drug-eluting balloons (Luminor – Ivascular-), and conventional angioplasty balloons (Oceanus –Ivascular-). It also involved the use of equipment distributed by Philips-Spectranetics, Contract Medical, etc. In addition, the percutaneous closure technique was used.

This workshop is worth 3.8 credits and authorised by the National Commission for Continuing Education of the National Health System.

Following the success of this edition and all previous editions since 2015, two editions of this workshop are planned for 2019. The participants rated the course as excellent and of great medical interest.

Find out more or adjust your settings.

This website uses cookies so that we can provide you with the best user experience possible. Cookie information is stored in your browser and performs functions such as recognising you when you return to our website and helping our team to understand which sections of the website you find most interesting and useful.

Strictly Necessary Cookie should be enabled at all times so that we can save your preferences for cookie settings.

If you disable this cookie, we will not be able to save your preferences. This means that every time you visit this website you will need to enable or disable cookies again.

This website uses Google Analytics to collect anonymous information such as the number of visitors to the site, and the most popular pages.

Please enable Strictly Necessary Cookies first so that we can save your preferences!